Welcome at the airport. Hotel transferl.

Welcome drink Lunch without drinks at the hotel.

Free afternoon to rest from the trip Dinner and overnight in an hotel on the west coast. 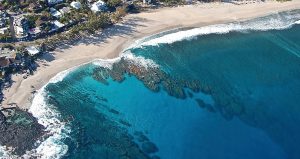 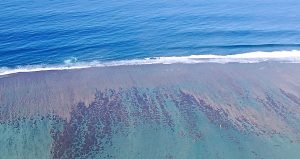 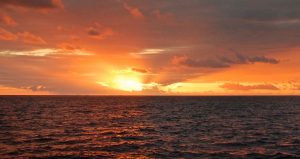 Departure for the south of the island. First stop at the “Souffleur” along the rocky coast to admire beautiful white foam geysers, resembling a whale’s spout.The pretty village of La Rivière Saint-Louis will be the last one before entering Cilaos Cirque. The pleasure starts with the road that plunges onto the bottom of Saint-Etienne’ river. This very picturesque road built in 1932, leads you to the beautiful cirque of Cilaos, a geological curiosity. Cilaos is the most southerly and driest cirque of the three.
The sky is more frequently clear there and its slopes have fewer waterfalls. In 1845, a path with difficult access is opened to pedestrians and oxes. In 1896, the thermal baths set up and, as far as a suitable road for vehicles was built, the journey to Cilaos was achieved on a “sedan chair” but Cilaos village is situated at 1200m!The ascent by the “400 bends road” offers exceptional lookout points with breathtaking views of the several hamlets.

When you finally reach the village dominated by the highest summits (the majestic Piton des Neiges 3070m, Grand Bénare 2896m, Trois Salazes 2121m), you’ll feel as if you were exploring a village of yore, with its old houses surrounded by flowery yards and gardens which in the hot season, look like a colourful artist palette: jacarandas with mauve shadings, dahlias, azaleas, roses, hydrangeas, mimosas... 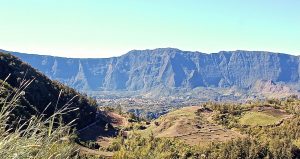 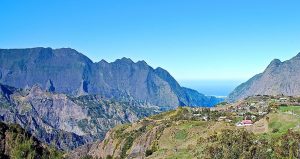 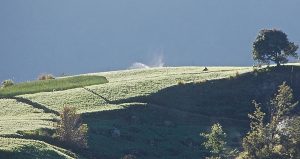 Cilaos is also famous for its hydropathy establishment, its magnificent embroidery, its wine (the only one produced in Reunion) and its lentils. Various walks invite you to go in search of this paradise. You reach the best view on the cirque by taking a forest path to « La Roche Merveilleuse » (or by car or by bus).

From up there, you overlook the whole cirque, the village, the paths, and the forests… It is also great to discover the thermal baths, both the old vestiges dating back to the 19th century to which you can accede via a picturesque road and the new facilities for spas, health and fitness. After a Creole lunch, you’ll visit the “Embroidery House” and discover “Les Jours de Cilaos”.

On the way back, in the late afternoon, you’ll stop at “the whirlpool” at L’Etang-Salé, and return to your hotel around 5.30pm Dinner and overnight at the hotel.

Leaving for a picturesque drive to the lookout point of Piton Maïdo. It gives the opportunity to admire along the road the characteristic vegetation of the western upper reaches and of course the Cirque of Mafate from Maïdo lookout point. In one-hour driving time, you start from 0 to more than 2200m high crossing a multitude of enchanting landscapes! Savannah, mango plantation, sugar field, gully in bloom, Rosat geranium field, pasture land, primeval forest and at least the beauty of the higher summits of the island. It’s for sure one of the most spectacular Reunion lookout point.

Mafate is a huge collapse formed when the pockets of magma were emptying out during the numerous Piton des Neiges’s eruptions. There’s no road at all to get into Mafate. It can only be reached on foot or by helicopter. Mafate is a major attraction for mountain lovers. This amphitheatre is dominated by a tens summits over 2000m with incredible sheer cliffs. From the Maïdo Peak: a difference in level of 1000 metres for a bird’s eye panorama! On the way back, you have a stop at “La Petite France” with its sweet climate and balmy air. There is an invitation atmosphere to dream. You discover the “firing” of geranium, a homemade activity carried out in copper stills. 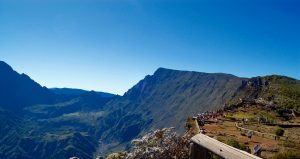 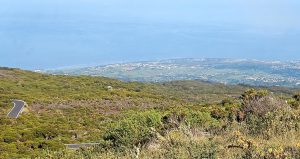 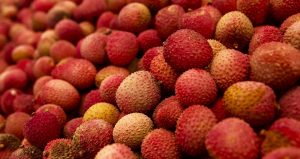 Geraniums leaves are distilled and its downs give fragrance oil. Creol lunch on the way.. Then direction to the Saint-Paul street market. This weekly street market is certainly the most important, picturesque, colourful and lively one all over the island. It occurs on Saint-Paul seafront twice a week: on Fridays, the whole day and on Saturday mornings. Saint-Paul, on the West coast, not far from Saint-Gilles-les-Bains and its seaside hotels, is also famous for being the birthplace of the populating Reunion. Walking through the market, you discover all the local products and those of the Indian Ocean zone: craft industry like Malagasy embroidery for example, florists and flower growers, herbalists, fishmongers, and street merchants selling tropical fruits, vegetables, and spices etc.

You would be completely out of your element strolling in between the welcoming stands, taking out from your small paper bags some local specialities: samosas, “bouchons”, stuffed peppers, pepper drops, prawn fritters, and all kind of “country cakes”.

Return to your hotel towards the end of the afternoon. Dinner and overnight at the hotel.

Departure to the north of the island, taking the coastal road to Saint-Denis, the capital. Thereafter, you discover the real face of the East coast: it’s an intensive farming of sugar cane district, its population in majority of Indian Tamil origin stems from thousands of volunteers, “imported” for harvest after the Abolition of Slavery in 1848. One of the evocative signs of this Tamil culture is thenumber of the colourful temples built here and there.

You can admire the outside architecture of the “Temple du Petit Bazar” in Saint-André. On the way you’ll stop at the Niagara Cascade, a real open-air theatre. You also discover the fantastic story of the famous “Bourbon Vanilla” by visiting a vanilla plantation. 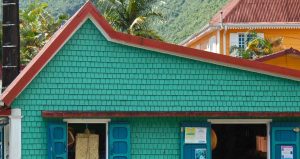 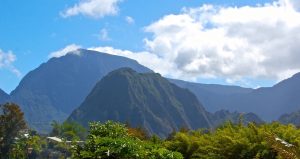 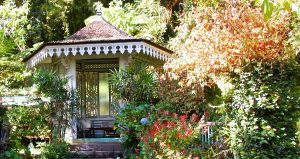 This orchid grows from St-André to Sainte-Rose. Then, you’ll enter in the largest, the greenest and the wettest cirque of the three (owing to its windward position). Salazie, a refuge of fugitive slaves or “runaways” was late colonized. Inviolate for a long time, this cirque is accessible by the only hemmed road running along Rivière du Mât”. You find very quickly an imposing garden of verdure and cascades, in particular the “Voile de la Mariée” (wedding veil). Its charm derives from the existing harmony between its waters flowing down a hundredcascades, its omnipresent lush vegetation, its imposing relief made softer by all the greenery, and the man-made buildings that blend in with the landscape.

Everything grows there, but you’ll notice in particular banana trees, bamboos and various vegetables cultivation like watercress, and the most well known is “chouchou”, imported from Mexico in 1840. Arrival to Hell-Bourg: the village was awarded in 1998 the title for one of the most beautiful village of France for the quality and genuine character of the place. It has been built up around hydropathical sources, which brought to this cirque its fame until its permanent closure due to mass fallen rocks in 1848. After a Creole lunch, you may visit this village of ancient times, real museum of Creole architecture and the “Folio House” with its impressive garden.

Return to your hotel around 5.30pm. Dinner and overnight at the hotel.

Lay day without lunch.
Possibility of optional excursions such as helicopter flights. 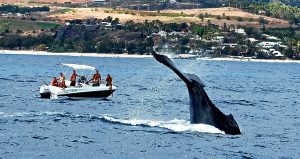 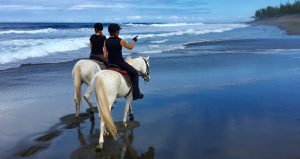 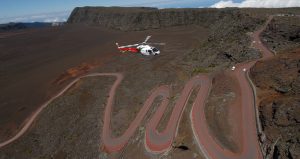 07.00am Departure to the south of the island, at the beginning of the South-East coast through Tampon, by driving back up to “Plaine des Cafres”, a cattle-breeding area (bovine, sheep) dotted with brooms, old tamarind trees and acacias. The scenery in the High Plains is magnificent. Bourg-Murat is the starting point to take the forest road from where you’ll enjoy the numerous sights, particularly the “Nez de Bœuf” (Ox’s Nose) with a panorama over “Rivière des Remparts”.

The edges of this canyon are the witnesses of the first “Caldeira” (depression in a circular form) caused by the falling-down of the summit of “Piton de la Fournaise”. When you continue, you discover a lunar landscape, “Plaine des Sables” (the sands plain), born from the falling-down of the second volcano which built itself into the caldeira. After Plaine des Sables, the road goes on in-between the distorted ruins of ancient craters up to the last bluff before the central volcano site. Here, from the edge of a 300-metre high “Pas de Bellecombe” belvedere (2311m), you can gaze at the almost prefect cone of La Fournaise, culminating at 2631m. 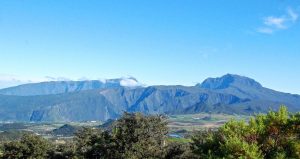 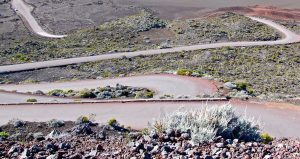 Reunion Island came to life after two major volcanic events. Around 3 million years ago, the first event made magma emerge to the surface of the ocean, around a central crater whose remnants are now the culminating point of theisland: Piton des Neiges (Snow Peak 3070m).

The second one occurred about 30 km to the South-East 400 000 years ago. A new volcanic massif formed and came beside the first: Furnace Peak, still active today and erupts regularly about 3 times a year, for the great delight of visitors. A path along Pas-de-Bellecombe leads down into this absolutely fascinating “enclosure”:

07.30am Departure in direction of Saint-Pierre, where the leeward coast becomes the windward coast and takes another colours and a very special animated atmosphere. You follow the road to “Grand Anse” creek, with its beach bordered with coconut palms, a real heaven of peace. Every weekend, the brand newly married couple investigate the place for the pictures. The many lookout points afford the enjoyment of discovering this charming part of the island: Manapany, Langevin, and “Cap Méchant”: there the ocean crashes in impressive waves against the jagged black lava cliffs. A little bit farther, crossing the bottom part of the coloured wood forest, you discover, at the foot of the volcano, the recent lava flows. A total landscape breaking up with the “Great burnt land”: actually, the tropical exuberance makes way for a much more mineral environment. Lots of those rivers of lava increased the island over the ocean of tens hectares! The whole region has a strange atmosphere to it, due perhaps to the fact that no dwelling can be seen for about thirty kilometres.

In Sainte-Rose zone, you stop at “Anse des Cascades” (waterfall cove), with its tiny fishing-boats landing sites and at Piton Sainte-Rose, where the church “Notre Dame des Laves” has been miraculously frozen around by the 1977’ lava river without being damaged. But more than 50 houses has been destroyed! Since then, this place is a famous pilgrimage spot. On the way back, and after a Creole lunch in the surroundings of Saint-Philippe, you visit a wonderful and wild botanical garden: “Le Jardin des parfums et des épices”. (Spice and fragrance garden). 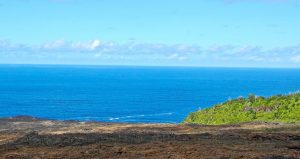 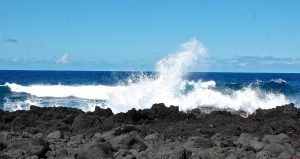 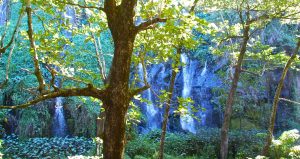 You’ll explore hundreds of species of native exotic plants including many medicinal, ornamental and fruit spices,some of which being a century old. A guide with a perfect knowledge of the garden and of its history will take you round the place and initiate you to the manual pollination of the vanilla flower (October to January).

Return to your hotel around 5.30pm. Dinner and overnight at the hotel.

Lunch at the hotel.

In the late afternoon, transfer to the airport and departure. 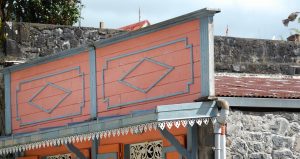 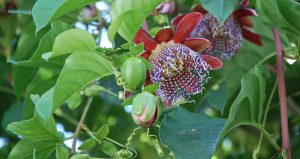 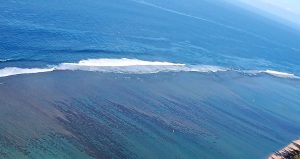 A suggestion of itinerant trip
8 Nights

A suggestion of theme trip
5 Nights